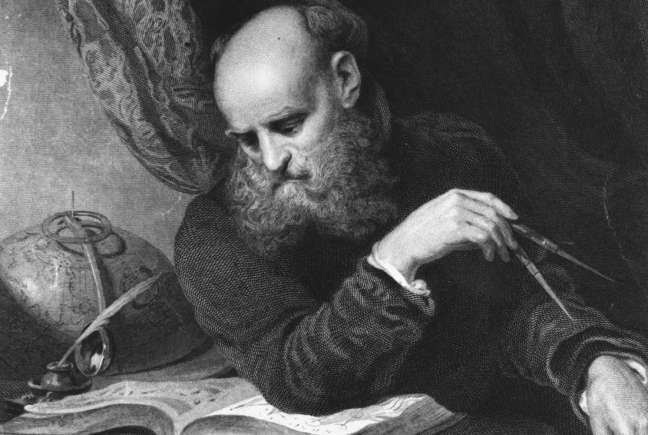 When I was in a preaching ministry in Illinois, I received in the mail a self-published book by some over-eager, biblical literalist arguing that Galileo and Copernicus and pretty much every other living human being with a grade school education for the last five hundred years were wrong. The earth, he breathlessly set about “proving,” is not only the center of the solar system. It is also the unmoving center of the entire universe.

I remember thumbing through the book chuckling to myself about the craziness of the whole thing, but also kind of impressed by the single-minded, obsessive passion. I mean think about the effort and commitment required to write an entire book, publish it, and then mail it to complete strangers in the hopes of convincing them that the last 500 years of established scientific thought is wrong. But I suppose there are no nominal geocentrists. It’s a bit like veganism. If you’re going to adopt the position that bacon and ice cream are bad, you had better be passionate.

But what if they’re right? (No, not vegans. We know they’re wrong.) What if the earth really is the center of the universe and Galileo and Copernicus were actually wrong? I’m not saying that the observations that scientists have made about the physical universe are wrong, but what if the way that their observations have been interpreted are wrong?

You’ve probably seen videos like the one below. They are designed to show the physical insignificance of the earth in the vast expanse of the universe. It’s impossible to watch a video like this and not have two distinct, but related feelings: awe and anxiety. The awe is the result of becoming suddenly aware of anything transcendentally expansive. It’s the same feeling many of us get standing on the beach looking out over the ocean or sitting through the symphonic performance of a classical masterpiece. The anxiety is the result of coming face to face with our smallness and insignificance. There is a fear about being adrift on the open sea which is the same fear that we might feel about being adrift in an expansive universe.

There is a certain melancholy that accompanies insignificance. Even Charles Darwin recognized this. He said in his autobiography: “[Consider]…the view now held by most physicists, namely that the sun with all the planets will in time grow too cold for life, unless indeed some great body dashes into the sun and thus give it fresh life…Believing as I do that man in the distant future will be a far more perfect creature than he now is, it is an intolerable thought that he and all other sentient beings are doomed to complete annihilation after such long-continued slow progress.” And so we must face the “intolerable thought” that our sense of grandeur and higher purpose is a mere illusion when understood within the context of the entire universe.

Well, that’s one way to look at it.

I would agree that if matter is of ultimate significance in the universe, then Copernicus and everyone since him are correct. If the primary stuff of the universe is “stuff,” then we don’t matter. And if “stuff” came first and “stuff” is all there is or ever will be, then we probably need to get over ourselves. The universe literally doesn’t revolve around us.

But what if matter isn’t of ultimate significance? What makes us assume that size is all that matters? What if “stuff” didn’t come first at all? What if mind comes before matter and is therefore of more significance than matter? What if what preceded the creation of all the stuff of the universe was a Mind? All of a sudden, our perspective is radically shifted. In the absence of other intelligence in the universe (a question I have an open mind about), this tiny planet all of a sudden becomes the bustling center of a vast expanse of mindlessness. After all, a mind is required to even entertain the very question of what is at the center of the universe. If matter were the center of the universe, it wouldn’t be aware of it. When we think about it from this perspective, our melancholy gives way to glory and wonder.

This all makes me think of those famous words of a shepherd written millennia before Galileo or YouTube videos:

When I consider your heavens,
the work of your fingers,
the moon and the stars,
which you have set in place,
what is mankind that you are mindful of them,
human beings that you care for them?

You have made them a little lower than the angels
and crowned them with glory and honor.

So was this frustrated biblical literalist right and Galileo, wrong? Well, maybe he was right but for the wrong reasons. His science was clearly wrong. But his theology was right after all.