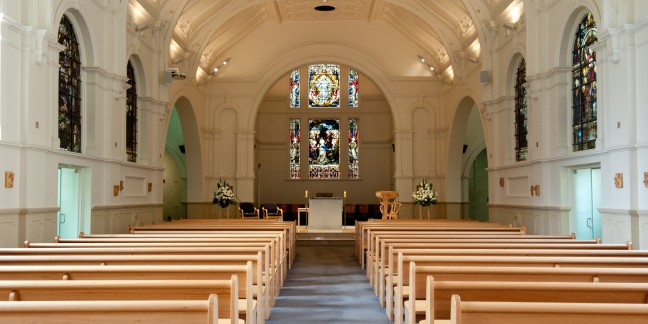 If there was one word to describe 2020 it would be “empty.” Empty schools. Empty houses of worship. Empty arenas. Empty streets. Empty restaurants. Empty proms and graduations. Empty beaches. Factories without workers. Funerals without mourners. Weddings without revelers. Grandparents without grandkids. Teachers without students. Doctors without patients. Even stores marginally filled with people are also filled with eerie silence. Neighbors and friends afraid to talk. Strangers afraid to lend a helping hand.

Totalitarian regimes are always noteworthy for attacking mediating institutions before they attack individuals. They take over business. They close civic organizations. They remove local governance of schools. In some countries, they may even close churches and separate families. It is all a calculated move to create an atomized society consisting of only individuals and the State. It is the State alone that can provide meaning, structure, and care. Other mediating institutions need to get out of the way and let the State do its job.

Our mediating institutions were struggling and crumbling long before this crisis began, but this crisis has put a dizzying number of mediating institutions into Intensive Care. Thousands will not survive. We are now the atomized society of the empty public square. Churches? Closed until the government says they can open. Schools? Closed until the government says they can open. Factories, restaurants, sports leagues, civic life? Closed until further notice. We now “shelter in place” with only our families – but even family has been undermined. You better not visit grandma and grandpa! Cousins? Out of the question. It is now just the individual and the State operating in an empty public square. We’ve all observed the rising, fevered pitch of individuals – both on the right but especially on the left – crying out for the State to save us. Any institution like a church who dare raise a voice of question or protest is shouted down. “It’s for the public good. Go home. Sit on the couch. The government will save us.”

“Never mind your civil liberties. We are in crisis! I can’t believe you are even questioning the government.”

I’ve never been a libertarian. I think just and transparent, representational governments are critically important for a flourishing society. But I also believe that a government operating in an empty public square free from mediating institutions can also be a terrifying thing for individuals.

This is probably going to be a popular post for some of you. This will likely be unpopular to others who want to straw man my position. I’m of course not claiming that shelter in place is unnecessary. Just ask my teenage kids what my position is on shelter in place. I simply believe that good citizens and good mediating institutions must ask hard questions of their government. The minute we are told to “shut up and comply” is the moment that tyranny begins.